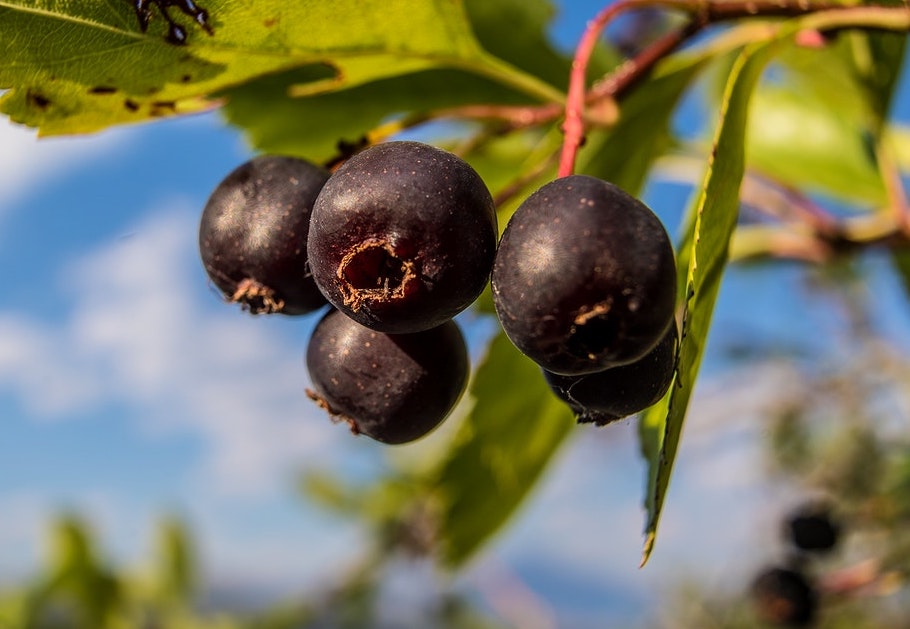 Queen of the food forest, this tasty “blueberries-in-a-tree!” favorite is easy to grow, is not too picky about its soil (unlike some plants I know… coughBLUEBERRYahem…), and will give you enough fruit to make pies, muffins, syrups, tarts, and a thousand other delights.

Saskatoon may have great potential as an edible border fence, by planting one every 3-6 feet, though keep in mind that deer will eat the leaves/branches, and of course birds will eat the berries. Serviceberry is one of the first plants to flower in the early spring, inviting in a plethora of pollinators because of the massive bush of snowy-white flower clusters. Some people get serviceberry for it’s ornamental value.

Saskatoon serviceberry has many names, such as Saskatoon, Pacific serviceberry, western serviceberry, alder-leaf shadbush, dwarf shadbush, chuckley pear, or western juneberry. And though all serviceberry species’ have pretty much identical berries, the Saskatoon serviceberry (A. alnifolia) is the most popular for fruit. This is probably a combination of it being one of the more prolific species (growing more berries per branch—though sometimes out yielded in total by larger, broader species that have more branches), and also because it is probably the shortest species of the Amelanchier (Serviceberry) genus, which makes the fruits much easier to harvest, since they don’t tend to grow too far out of reach with anything more than a stepping stool. These factors likely contribute to the fact that it is also the most commercially utilized species of serviceberry.

If you’ve never tried the serviceberry fruit, the simplest way to think of it is a tree that grows blueberries. Obviously they’re not blueberries, but though a little more reddish, they taste similar enough that they would probably fool most people. Some who taste a blueberry and serviceberry back to back suggest that they like the serviceberry taste more.

Serviceberries make great pies, muffins, pastries, tarts, syrups, jams, jellies—pretty much anything you would do with blueberries could be done with serviceberries. And these are a known delicacy, so if you do an Internet search for serviceberry recipes, you’ll have more options than you’ll ever have time to cook.

The biggest difference between blueberry and serviceberry is that serviceberries grow much more easily in places lacking the strongly acidic soils required for blueberries. Yet though it doesn’t need it, it can tolerate rather moist and/or acidic soils. And their seeds are inconspicuous enough that you can eat them with the berries fresh or cooked. And though it may take a few bushes to get enough fruit to grow in serious quantity, there is real potential for the serviceberry to become a staple food.