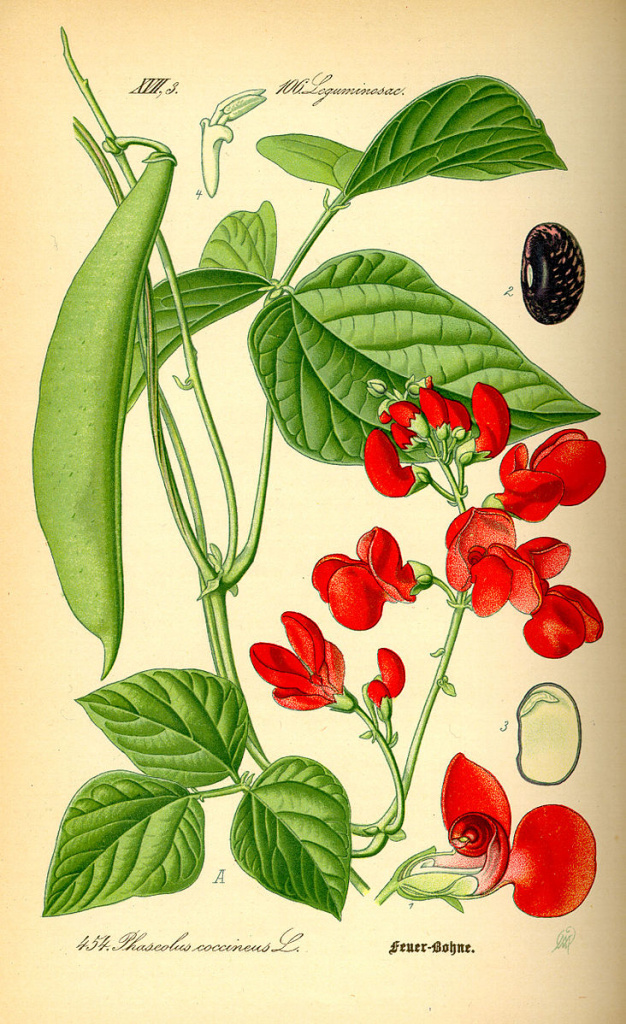 The best perennial green bean I can find. And they can also make perennial hard dry beans, too. And did I mention they are perennial? I will give a heads up, however—without the ground protection, many gardeners never see this bean again.

First off, be aware that scarlet runner beans will only be sufficiently hardy to zone 4 (sometimes even 3) if you provide sufficient mulch at their base to protect them from the harshest part of winter. This could, of course, be accomplished by mulching, but it could probably also be accomplished by planting a thick perennial ground cover plant at it’s base that will drop leaves and create mulch for the runner year after year. Just remember that the bean will be regrowing afresh from the root every year, so new growth will need to penetrate your mulching ground cover. If the leaves of the ground cover are not too thick and firm (thus creating a weed-barrier mat), this shouldn’t be a problem. A thick evergreen ground cover might be effective also, since it should put down a very slow but constant flow of mulch, and act as windbreak around the runner bean’s roots.

The scarlet runner bean is probably the best cold climate, perennial green bean. Of course, like other green beans, if you wait until the seeds are ripe (dry), they can be used as a dried bean, as you would use pinto beans, great white beans, and red beans. Unlike other beans, scarlet runners are usually grown for their beautiful spray of scarlet-red flowers that renews itself from early summer until they freeze in the late fall, making them a great pollinator species. But also like other beans, scarlet runner is a nitrogen-fixer, so they will naturally feed and fertilize their fellow plants.

And what about their flavor? Well, they are a bean, and a long one at that, and can be eaten the same way, but the flavor is described as tasting different than other green beans. It’s a little more nutty—with a bit of a bite to them, but overall quite yummy.vi

As with any bean, you’ll want to pick them before they get too firm. Picking them before they’re full size assures that you’re getting a fresh, ready-to-eat bean. Once they reach full size, they’ll quickly start getting rather fibrous, and too hard to eat. Many people don’t know this, but the primary difference between hard common beans (like pinto beans, northern white beans, red beans, etc.) and fresh-off-the-vine green beans is the time of harvest. Harvest unripe, and you have green beans. Harvest ripe, and you have dried beans that can be stored in a bucket for many years. They usually come from the same plant (the common bean, Phaseolus vulgaris). Though runner beans aren’t the exact same species, the rules are the same.

Don’t eat the dried beans raw. Once beans dry and harden, they develop the properties that lead to flatulence and upset stomach that will only go away by proper cooking. In fact, much of the issue people have with beans and flatulence comes from insufficient cooking. This is the case with most common beans and green beans.